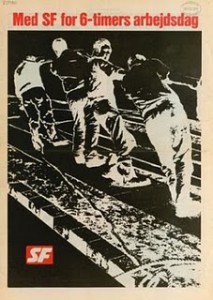 Last week, I appeared in radio. It was in a daily magazine program called “Apropos” on Danish Radio channel 1. Since the program was starting again after a summer break, the theme of the week was work.

My task was to tell the history of working hours: from the 10-11 hours workdays, dictated by the employers in the 1860’s, through the demand for an 8 hour day, raised by trade unions in 1899 and realized in 1919, until today’s 37 hours working week. We also discussed the reasons for lowering the workday throughout the 20th century. Finally I was asked about my view on future working hours: especially the actual, political proposal by the left to increase the work week with one hour.