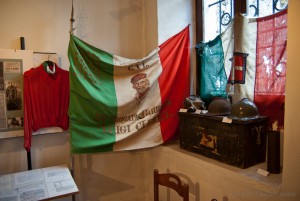 This is the sort of museum, which most museum professionals scorn. What you see in the picture are probably the only real objects in the Museum of the partisans in Dongo, Italy – the rest are faded photo copies. The texts are in Italian only, and there is dust in every corner. By its subject, this modest little museum, however, is as important as any national gallery. It’s about the actual place where Mussolini was caught, sentenced and executed by partisans – thus finally ending the despicable era of Italian fascism. In a world where neo-fascists can become respectable members of government, we should not criticise those, who strive to keep the public memory of these important events alive, for not doing it well enough. Let’s criticise the Italian state and museum professionals for neglecting their effort.