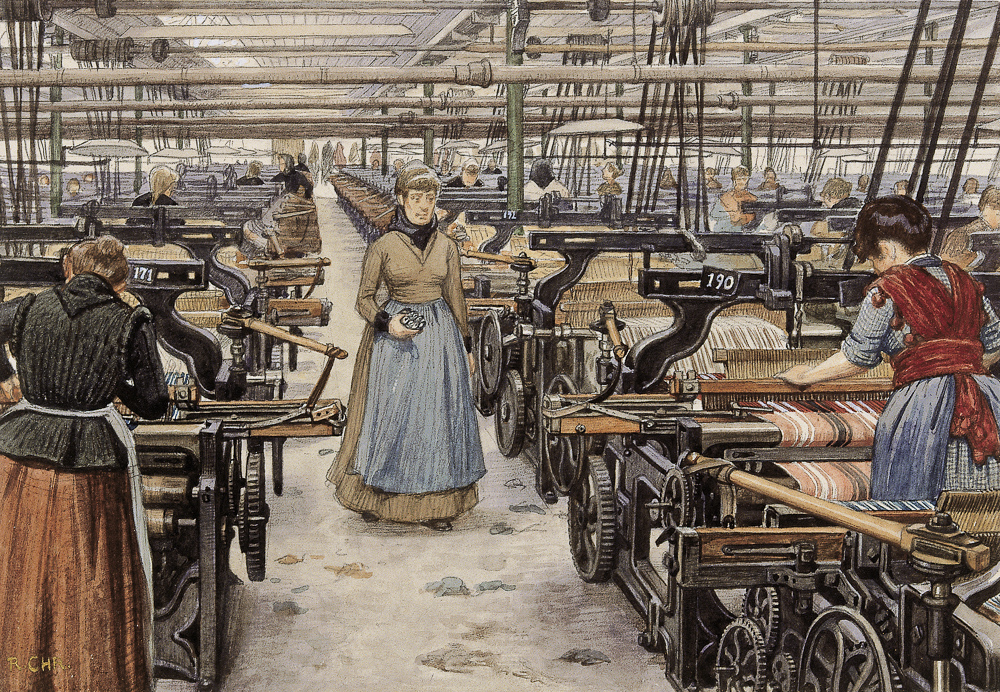 Today it is 8 March, the international day for women’s liberation.
This day was inaugurated at the international socialist women’s congress, which took place in Copenhagen in 1910.
On the occasion of the day I have translated a text about the time, when female workers started organising – and the reactions they were met by, from their male colleagues.
The text is originally from a book that I have co-written, called “Arbejdernes historie i Danmark” (History of Workers in Denmark)

One winter evening in 1898, there was a meeting of the Odense branch of the textile workers union. On the agenda was women’s work – but it was only men who participated in the discussion. According to the minutes, the discussion was tense. Some male members were blamed, that they had let their wives work in the same factory as themselves. The married women were undercutting wages, and should not be allowed to take on a man’s job.

In its program, adopted in 1888, the Social Democratic Party called for “The complete liberation of the Human Being, regardless of Gender, Race or Nationality”. The party specifically demanded the same right to vote for women as for men and equal pay for equal work. Politically, social democrats stood out as radical supporters of gender equality in public life. But when it came to practicing equality inside the family the case was, however, more complicated. The discussion among the Odense textile workers reflected the widespread attitude that the man was the family breadwinner, and that the goal of the labour movement should be to secure him a salary, which would made it unnecessary for his wife to work outside the home. The housewife was the female ideal.

However, it was an ideal which it could be hard to maintain in practice. In the late 1890s, women accounted for about 20% of all industrial workers. In addition to this came a large group of other female wage labourers, for example maids. In many working families the woman’s income – whether it came from a permanent job at a factory or from more odd jobs such as doing laundry – was of great importance. And unmarried women were obviously dependent on their own income alone.

In his memoirs, a male textile worker recollects how his mother, after his father’s death in 1890, was offered work in Rubens Textile Mill, one of the largest in the country:

… My mother accepted the offer but by God, my father’s family was in rage because she was going to be a factory worker. But point to any other way for my Mother to support herself and 3 children, they did not …

In memoirs of female textile workers we may read how they chose factory work because it offered them more freedom than a life as a maid, despite the harsh work discipline. For others factory work was an opportunity to make themselves independent of a man whose greatest contribution to family life was to spend his pay check at the pub. In a society where women were politically, legally and economically disenfranchised, getting one’s own pay check could lead to a more independent life.

There were proportionately fewer women than men who joined the trade unions. This was partly because many were employed in industries where the putting out of work was still widespread. For instance many seamstresses, who was sitting alone at home in a small chamber, working for a company. But even when men and women worked under the same conditions, as in the textile industry where roughly half of the workers were women, the women’s organization rate was significantly lower than men’s.

That was not because women were uninterested in better pay and working conditions. But the unions were dominated by men, whose interests did not always coincide with that of the women. When the union of skilled, male hand-loom weavers finally decided in 1884 to accept the unskilled, female power-loom weavers as members, it was partly out of necessity: they realized that hand-looms would soon be completely ousted by power-looms, so that the male weavers would have to work alongside women anyway. The men thus gave up the idea of keeping women entirely out of the factories. Instead, in many cases they succeeded in reserving the best-paid jobs for themselves, regardless of the fact that the unions officially were in favour of equal pay.

Differences in everyday life and experiences of the two genders could also create tension. The labor movement led a long-term struggle for a better life. The dominant culture in the movement was built on the ideal of appearing disciplined and deliberate in every aspect of life, as the moral basis for claiming better conditions for the working class in the future: “Do your duty and demand your rights”, which was the slogan written on many a red union banner. It was a culture that reflected the male experience in particular.

For women, the matter was partly different. They were solely responsible for the care of home and children, and hungry children could not be satisfied with promises of better conditions in the long term. On a large female workplace as Rubens Textile Mill, women had to sneak away to heat food during working hours, which they would bring home to their children during breaks. Sometimes they returned too late for work. The employer responded to this by issuing fines, which made huge inroads in the women’s weekly earnings.

In 1886 225 unorganized women at the mill spontaneously put down work. They all joined the Textile Workers’ Union, which gave the support for the strike. But the strike ended in defeat and internal disagreements. In a later retrospect, the chairman of the Textile Workers’ Union explained the failure of the strike as partly a result of the female nature, which had led the strikers to act impulsively and undisciplined. When women were perceived by men as problematic colleagues only because of their sex, one might understand why they did not always felt attracted to the male unions.

Gradually, however, there were an increasing number of women who organized themselves, and in the late 1890s about 20% of the female industrial workers were union members. It was a number that the Danish labour movement was proud of, as it was higher than in most other countries at the time.

While many unions, which had originally been purely male, opened their doors to women, there were also attempts to create purely female organizations. In 1883 female tailors in Copenhagen formed their own union, and in 1885 both female tobacco workers and the laundry workers in Copenhagen formed a trade union. The female weavers followed in 1886 and in 1899 the house-maids. Many of these female unions later merged with the corresponding male union. One notable exception was the Union of Laundry and Cleaning Women which after a difficult start grew steadily throughout the 1890s, led by the renowned Olivia Nielsen. This union also started organizing female industrial workers, new locals were created in the province and in 1901 it was changed into the long lived Federation of Female Workers in Denmark (KAD). Likewise the union of house maids grew into becoming the larger Federation of Domestic Workers.

At the political level, the Social Democrats were at first quite sceptical to the Danish Women’s Society, founded in 1871. Working women, it was believed, should organize themselves on the basis of their class, along with the male workers, not on the basis of their gender together with bourgeois women. In 1885 the Women’s Progress Association was founded which, in contrast to the non-political Women’s Society was openly oriented toward the Social Democrats and the radical wing of the Liberal Party. It became a platform for political struggle for women’s liberation for women from the labour movement – and probably also sometimes a retreat from the male-dominated social democratic party organization.

The fundamental questions about the relationship between class struggle and gender struggle was however still not resolved. On the contrary, it remained an issue which has given rise to discussions ever since.