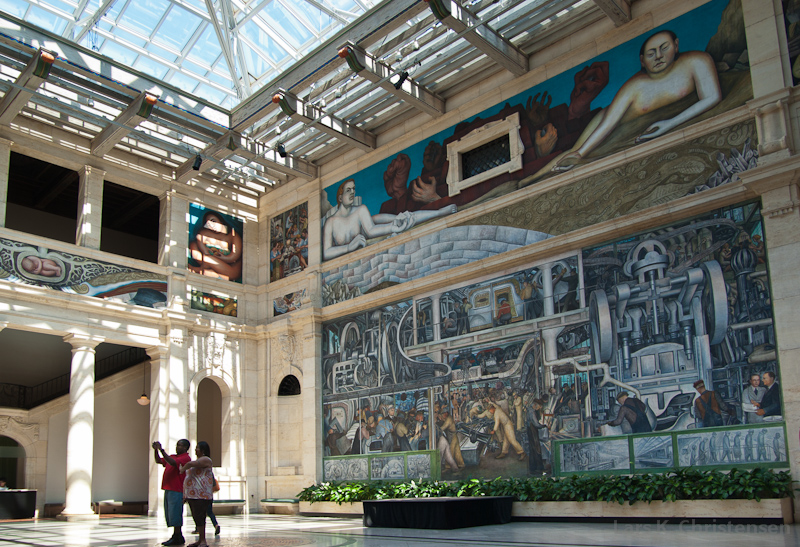 Detroit has been in decline for decades. It now has only less than half the population it had, when the auto industry was at its highest. But worse: parts of the inner city have become more or less a wasteland. The wealthier has moved out to the suburbs or elsewhere, and taken their tax money with them. This has forced the city administration to gradually close down public facilities like schools, libraries, fire stations, etc. – thus creating a negative spiral of more people moving out.

Never the less, there a still more than 700.000 people living in Detroit. Many of them are rightfully proud of their city, and struggling to keep it alive. There are good things happening in Detroit. There are places where people live and enjoy life. And there are islands of magnificence in the midst of despair. One of them being DIA, the world famous art museum.

Recently, the city leaders have made the desperate move of filing for bankruptcy. The debt is enormous, and there is no money to pay the creditors – let alone the wages of those working for the city. As part af the bankruptcy process, all assets of the city has to be evaluated. This includes the collections of the DIA, which is owned by the city. Representatives of Christie’s auction house are already at work, like vultures circling over a wounded, but still living body.

There is no easy solution to Detroit’s problems. Basically, they are the result of an economic system which makes people servants to the market, instead of the other way around. As one commentator remarked: There is hubris to the fact that America thinks it can rebuild a country like Afghanistan, when it cannot even take care of its own cities.

But one thing is for sure: closing down even more public facilities, and selling out all of the assets that makes the city worth living in, will not help the people of Detroit. On the contrary: the thought that Diego Rivera’s famous murals, celebrating the workers of the auto industry  – and the human spirit of ingenuity and creativity in a broader sense – should be auctioned off, ripped down from the walls and moved to some private collection is truly bizarre. It would be an assault to the heritage and historic legacy of the city. And it would only be adding insult to injury for its people.